As someone who works mainly with digital data and software, it’s nice to have a “material” hobby that can get my hands dirty. That’s why I’ve been building my own guitar effects recently (but more about that in a later post…). For now, consider that the only guitar amplifier I’ve had for ages is my Peavey Classic 30 (ca. 2000, back when they were still made in the USA). It sounds great on stage, but packs too much of a punch for testing out circuits on a workbench. So I decided to build myself a small, low-power DIY practice amp. I was hitting up some thrift/antique stores one weekend in search of a lunchbox or small suitcase to build the amp into… when I came across this instead: 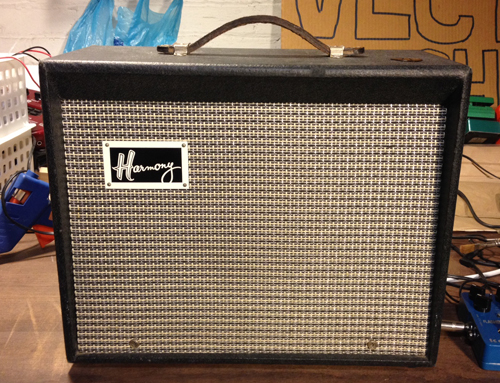 It’s a Harmony H303A, which I’d never seen before, though it seems to get good reviews and goes for $150-200 on eBay when listed (which is rare). The vintage appears to be 1950s or so, and online sources claim it outputs somewhere in the 2-5 watt range… too quiet for gigging but good for practicing and recording. A dealer in an antique mall had it in his collection and was really hot to move it for some reason. The price tag originally said “$50 for that sweet tube sound!” and when he went down to $25 I figured, “even if it doesn’t work, it’ll make a nice cabinet for the little solid-state practice amp I was going to build in the first place.” As it turns out, the Harmony does work… although it took a little effort to whip it into shape. Here’s a video showing the fruits of my labor:

Since the antique shop didn’t have any electric instruments to test out the amp with, I just took it on blind faith. I got it home, plugged it in, turned the switch and: BZZZZZZ!! I wiggled the volume knob and: SRKRCHCH!! Plus: funny smells. So I took the following first steps:

Wait, what?!?! Reread that last bullet. Yes, this amp appears to have left the factory without solder joins on some of the connections. Either that, or it crossed paths with a really lazy technician at some point. They apparently just wrapped some of the wires around lugs to save time/money:

After doing these simple things, the amp actually made music… but was really quiet. Basically, I needed to crank it to 11 to get anything useful (and the volume only goes to 10). I know it’s just a little 2-5 watt combo amp, but it should definitely be louder than an iPod speaker…

I did some more research on rebuilding vintage low-power tube amps like this, and came up with the following checklist of things to try:

My friend Trevor Baker of TRVR Handwired repairs and builds custom amps for a living (e.g., St Vincent uses his amps in her recording studio). So I shot him an email. He suggested that I start with the cable, fuse, and capacitors, and if I’m still not happy I could look at replacing the tubes and/or speaker. He sold me $35 worth of components and mounting hardware from his supply and gave me a 30-minute crash course with more details on what to do next. Between his help and this Instructable (on fixing an old Kay amp, although most of it still applies), I was ready to start rebuilding.

(Note: I was actually able to find the parts for about $15 online, although they were off-brand of who-knows-what quality. Since I wanted to be sure I had the right parts I preferred to go down the street to the TRVR workshop and pay a little extra.)

Here is the Harmony H303A official factory circuit diagram, with the changes I planned to make highlighted in red:

In practice, this is what the physical changes looked like under the hood:

I had to drill out the hole for the new larger power cable and make a new hole for the fuse holder (both 1/2 inch). The power cable is actually from an unused MacBook power adaptor I had lying around; the white cord looks really nice with the white-on-blue graphic design on the outer panel. One tricky thing was replacing the filter caps: they originally came in a “can” that stuffed all three capacitors into a single shielded cylinder sticking up out the back. I left the can where it is for looks, but it isn’t actually connected to anything. Instead, I just mounted three new capacitors on terminal strips underneath it.

All in all, this was a fun little surprise project. I cost me $60 total, plus about 3 hours of research and 2-3 hours in bench time one Saturday afternoon (mostly spent triple-checking every step to make sure I understood it before doing it). Once it was done, Trevor gave it a listen and said it wouldn’t be too hard to overhaul the circuit with more powerful tubes… giving it more volume and more of a Fender Champ type sound.

I think I’ll leave it as-is for now, although I might still replace the tubes to see if that makes it sound any smoother (another $30 or so). For the time being, it suits my needs as a practice/workbench amp, and I suspect it will be great for recording since it gets nice, warm distortion at low volumes that won’t clip the microphone. (That’s been a bit of a headache with my 30 watt Peavey; it doesn’t have the greatest tone at low volumes.) Besides, modding the Harmony to make it more powerful would require a new transformer, and I’m not super-comfortable working with higher voltages yet, anyway.

The whole process has made me want to learn more about tubes amps, though. Perhaps once I’ve worked my way though the queue of stompbox effects I still want to build, I’ll give amp-building (or modding) a try…